Already a Member ?  Login to Persiatrip 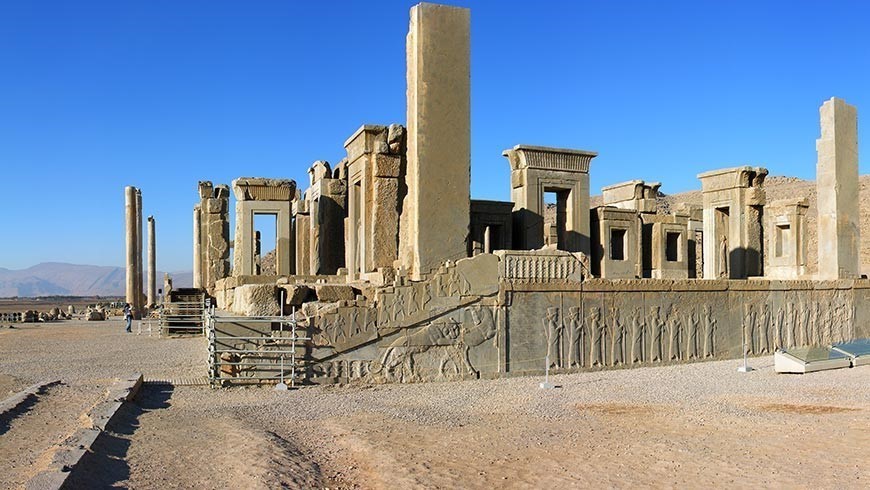 Situated in the northeast of Shiraz, Persepolis, (literally meaning "city of Persians") known to Iranians as Takht-e Jamshid ("the throne of Jamshid"), was the ceremonial capital of the Achaemenid Empire, founded by Darius the Great in 518 B.C, who made it the new capital of the Persian Empire, instead of Pasargadae, the old capital and burial place of King Cyrus the Great.

Registered by UNESCO as a World Heritage Site, this impressive complex of palaces including the Apadana Palace, the Throne Hall, and the Gate of All Nations is classified among the world's greatest archaeological sites, with no equivalence and which bear witness to the most ancient civilization.

Persepolis was built on an immense half-artificial, half-natural terrace backed against the Kuh-e Rahmat Mountain ("the Mountain of Mercy") and for creating the level terrace, soil and heavy rocks were used and fastened together with metal clips, making it a unique archaeological site.

The terrace of Persepolis, with its monumental staircases, exquisite reliefs, imposing gateways, and walls covered by sculpted friezes at various levels, along with gigantic winged bulls, and the remains of large halls, is a grandiose architectural creation. The studied lightening of the roofing and the use of wooden columns allowed the Achaemenid architects to use, in open areas, a minimum number of astonishingly slender columns.

Used to be as the seat of government and a spectacular center for the receptions where the nations subject to the empire gave their tribute to the king and festivals of the Achaemenid kings especially the "Nowruz" (Persian New Year), Persepolis was the example par excellence of the dynastic city, and the symbol of the Achaemenid dynasty.

Here in Persepolis in the twinkling of an eye, visitors can leave the modern world behind and find themselves in about 500 BC at the capital of the greatest empire the world had known to that time: the Persian Empire.

Having passed all the vicissitudes, Persepolis is still the greatest palatial complex of Persia, remaining as one of the most striking wonders of the ancient world which is absolutely worth a visit.

Sign up for our news to get latest updates and offers.

Persiatrip Group, the most active Online Travel Agency (OTA) in Iranian tourism industry with rendering the most reliable tourism services, provides convenient online booking for hundreds of domestic hotels and plane ticket purchase with high confidentiality. The group is honored to have been granted the electronic trust symbol by Electronic Commerce Development Center of Iran’s Ministry of Industry, Mine and Trade.